I have played D&D now for more than 41 years (since I was seven years old), and during those decades I've created many maps, with several periods of higher production back-in-the-day and more-recently since the (re-)advent of the mega-dungeon over the past 15 years or so.  I've shared my maps at several old-school forums, including (among those still alive and kicking), the Knights & Knaves Alehouse, Dragonsfoot, ODD74, and various Greyhawk-specific forums like Canonfire!, as well as my grodog's Greyhawk website, and a few here-and-there have found their way to Facebook.

The maps all vary in age, size, spi (squares per inch), media (pencil, colored pencil, colored ink pen, colored marker), intricacy, and level of completion.  I'd begun to re-inventory them over the past year or so, both to update my grodog's Castle Greyhawk archive, and to insure that I don't lose track of some of them.  This series is an effort to help me keep on-track with that inventory work, as well as an opportunity to revisit some maps I've not looked at in a long time, as well as, perhaps, to complete some that have lain fallow.

I'm (mostly) thankful that I haven't lost too many of my old creations, since I've heard several stories from Rob Kuntz lamenting lost maps and keys, manuscripts, entire sourcebooks, and such over the years.  Of course, such juvenilia's survival into the present is a double-edged sword:  some are definitely lame.  But even lame maps may often offer us opportunities to learn, and hopefully some nuggets to salvage and to bring forward into newer designs.   At minimum, they should demonstrate the progress I've made as a designer (in my eyes, at least ;) ), keep this whole blogging thing from going to my head, and hopefully some elements from the worst of them can still be repurposed:


We can rebuild him. We have the technology. We can make him better than he was. Better, stronger, faster.

So, I'll start this series about my maps---and perhaps their keys (we'll see; many of the levels remain unkeyed)---by beginning with one of my earliest surviving examples.  Here are the c. 1982-1984 maps from V1 Vanquish the Evil, drawn completely in green marker ink (I have no idea why!): 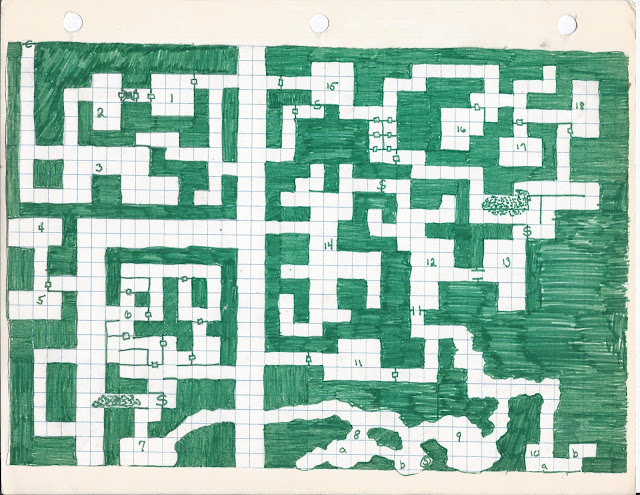 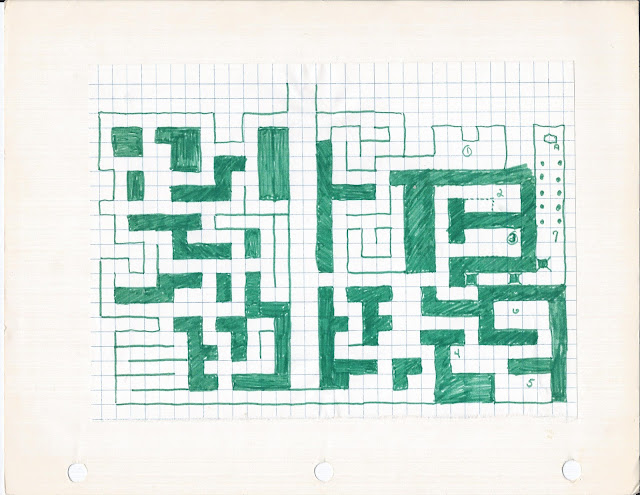 My next post will discuss the maps, and perhaps some of the history of V1 Vanquish the Evil, or I may just move on to greener pastures.  We'll see! :D

The Hyqueous Vaults was published over the holidays.  It is a free adventure written by members of the Knights & Knaves Alehouse forums to celebrate the 10th Anniversary of the  publication of OSRIC (the Old School Reference & Index Compilation, the first published retro-clone and the one focused on 1e Advanced Dungeons & Dragons): 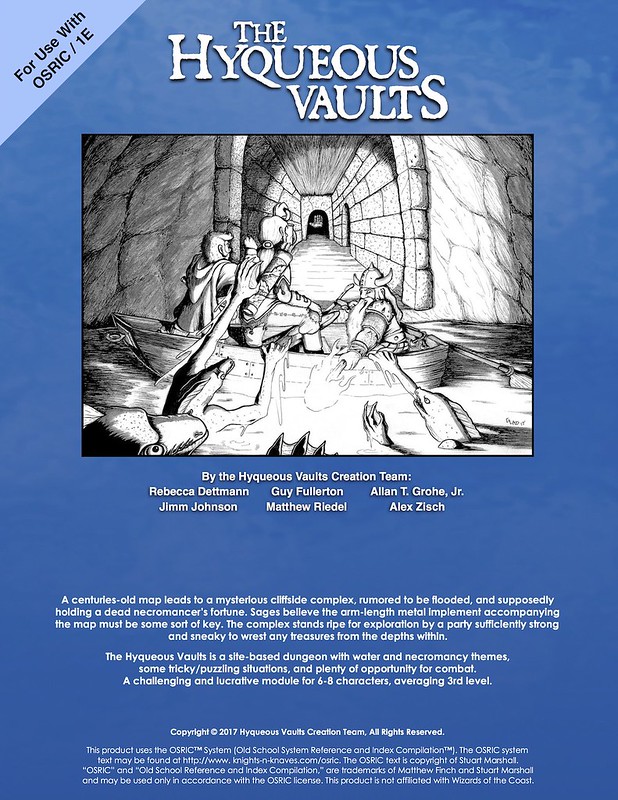 Its authors were
The Hyqueous Vaults has been reviewed twice soon after its release, and has been well-received to date:
You can download the adventure at https://hyqueousvaults.blogspot.com/p/the-hyqueous-vaults.html and we're working through options to print the adventure via both via Lulu's Print on Demand services, and a nicer professionally printed version too.

If you're interested in the development of the project, you can read its history on K&K at http://knights-n-knaves.com/phpbb3/viewtopic.php?f=11&t=13846.  We all riffed off of each other's ideas, modified the map, and plugged away at designing the encounters.  That discussion also includes some extensive discussion from the playtesting sessions, too.


Check it out, and please let us know your thoughts on it!