UPDATE 1 - Charting The Flanaess: a Settlements Distance and Mileage Chart

In May last year I began work on building a Settlements Distance and Mileage Chart for the Flanaess, but the project has lain fairly fallow until recently.


A crew of six of us will host a Greyhawk seminar at GaryCon XI in March 2019, focused on the state of the state of Greyhawk fandom.  The seminar is titled "Celebraing Greyhawk: A Fandom Renaissance" and the event description is:

Greyhawk fans have been creating and sharing content online for 25+ years, across many platforms. Join Bryan Blumklotz, Mike Bridges, Allan Grohe, Carlos Lising, Anna Meyer, and Kristoph Nolen as we celebrate and showcase Greyhawk resources created by the fans who champion one of D&D's oldest settings. Reference handouts will be provided, and perhaps prizes if we get our act together!
Additional informationabout the seminar  (including a recording of the session and any distributed handouts) will appear on Greyhawk Online at https://www.greyhawkonline.com/seminar.


One of the seminar handouts I'm planing is a working prototype for the mileage chart,  limited in scope to the Central Flanaess in and around the City of Greyhawk, so I’ve been working on that recently by measuring out the distances from city to city on the Darlene map, in millimeters:


Once the measurements are complete, I enter the raw data into Excel in the first/upper set of cities listings.  The green, red, and yellow highlighted rows are my fact-checking:  I want to insure that the figures true-up across each row and column, and then in total as well:

The second/lower set of cities listings is where I convert the measured distances in mm into scale miles (I’ll eventually do kilometers as well), based on this data and formula logic:

Like in the first/ upper set of cities, I also fact-check the figures to insure that they match properly.

I think I’ve also found a good methodology for how to manually count out of the Darlene map mileage distances:  I’ll simply print a copy of the “Index to the Cities & Features of the Flanaess” page from the Glassography and measure out the distances for each listed city, one city to a sheet. 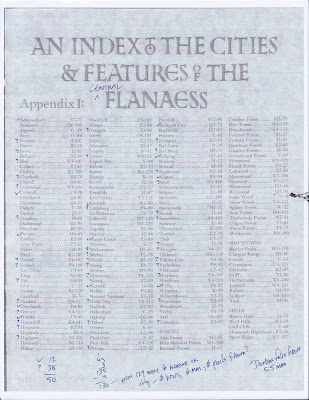 Interesting aside #1:  of the 130 settlements that appear in the Glassography index, about 50 appear in the general region of the Central Flanaess.  That’s 38% of the cities squeezed into an area only that occupies only 25% of the Darlene mapspace.

Interesting aside #2:  looking at each page of the original maps to calculate the settlement density will also be an interesting exercise to go through, I think.


One of the major issues I’ll want to call out in the data is a possible discrepancy in measurement when the distances span both of the Darlene maps:  maps can shift around, the hexes could be misaligned, etc., so measuring across both maps will be more challenging and more prone to error than when measuring within either map alone.

In my prototype data set, only Luekish, Radigast City, and Riftcraft appear on the right-hand map, so I calculated all of the left-hand map’s distances first, then measured the right-hand ones back to the left, and wrapped up with the right-hand-only mileage.


Once I have a better understanding of the scope included in the map handouts that we’ll distribute at the seminar (and we will post all of the handouts to Greyhawk Online, and at minimum an audio recording of the seminar as well), I will update the list of cities to feature any other major ones that aren’t already included in the chart, which will finalize the initial prototype data set.

Sometime after GaryCon, the rest of the long-haul work will begin, likely to occur in three phases:

This afternoon today, Paul Stormberg of The Collector's Trove held a Q&A session over on reddit about the contents of Gary Gygax's unpublished manuscripts:

This is an AMA, wherein I allow adventurers to ask me anything about the trove of treasures left behind by Gary Gygax, co-creator of Dungeons & Dragons, and what traps and guardians await them.

In the Q&A discussion, Paul offered several interesting revelations about the contents of the Gygax collection, including details relevant to the original Greyhawk campaign!

I'm quoting Paul throughout the text below, and also quote a few of the asked questions for context, as well.  And here's a quick mini-TOC in case you want to jump among the topics later:

The Gygax Collection as a Whole


T2:  The Temple of Elemental Evil

Paul very generously answered at length the questions I submitted, so I'm reproducing them here in full:


Also very noteworthy is that the Gygax Games web site has a new facelift, and it sounds like Paul and Gina will be helping to maintain it going-forward (if I'm interpreting their comments properly).

Under the Gary's Archive page is a picture of the Museum of the Gods map from the Castle Zagyg manuscript, too!:

Paul's video on the same page introduces the collection, and mentions the new Gygax Games Twitter account will be providing future updates, as well:  @gygaxgames.

All-in-all, this was a fine day for a Greyhawk fan, and I'm very curious to hear what more news may be revealed at GaryCon 11 in a couple of short months!

I drew most of this level last night, and noodled on it more today over breakfast and lunch.  It's about 80% done or so---I need to work on the detailing more, to make some decisions on areas that aren't connected to the rest of the level yet, insert intra-level elevations, etc., as usual.

I wanted to focus on some specific design goals for the flow:

Beyond what I noted above (and some miscellaneous very light notes on the map), I don't have a specific ideas in mind for the key, but I do envision this as a more upper-level, perhaps even an alternate primary entry route into the dungeons.

I got the idea to start another new level when browsing through OSRIC for an unrelated product, and I rediscovered Sean "Stonegiant" Stone's starting area VI on page 159 (in the PDF).  (My entry point is the 30' wide stair leading down into the level, center-ish in the lower-left quadrant):

The full-size version is available @ http://www.greyhawkonline.com/grodog/gh_castle_grodog_level-behind-bars-01.jpg

The other articles in my Mega-Dungeon Maps series include: